Creating our Own Technology Radar

The technical team at Storm ID have followed the ThoughtWorks Technology Radar since its inception in 2010. Their radar tracks changes in software development that ThoughtWorks find interesting.

Several times a year we meet to discuss the latest edition of Tech Radar. During that time, we go over what has been added, what has stayed the same and how we each feel about any changes.

Through these meetings, and due in no small part to encouragement from ThoughtWorks themselves, we decided to build our own radar.

Since creating the Storm ID Tech Radar, we have become more efficient in determining our priorities and circulating useful and interesting techniques throughout the company.

It used to be the case that sometimes tools or technologies were being used by some while others had no idea they existed! Now they can be documented and shared widely using the tech radar.

There are three component parts that make up each tech radar; a blip, a quadrant and a ring.

A blip is an interesting technology, tool, platform or technique that is involved in web and software development. 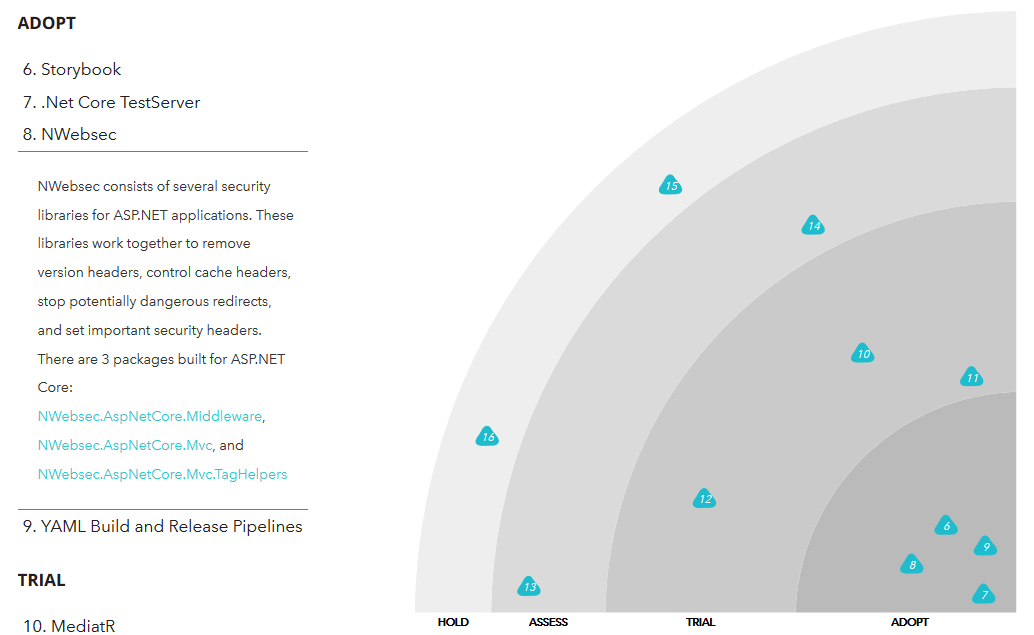 The Tools quadrant from the first Storm ID Tech Radar.

Rings are used to make opinionated distinctions between blips. We adapted our rings based on the original criteria Thoughtworks devised. Ours are:

Adopt: This ring is reserved blips that we feel should be used on every project that might benefit from it.

Trial: We use this ring when a blip has been used on one client project but feel it should be used in other cases.

Assess: We put blips in this ring when we are looking to use them in a client Proof of Concept or in an internal project.

Hold: This ring is used when there are issues with the current use of a blip and we are looking to discontinue its use. 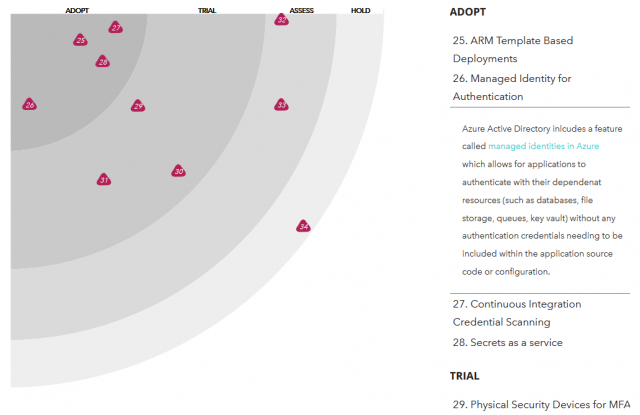 The Techniques quadrant from the first Storm ID Tech Radar.

A workshop was held earlier this year to gather suggestions for blips so we could categorise them under quadrants and discuss their allocation within our modified rings.

Once we had the makings of our first Tech Radar, we developed a web application as an administration back-end and customised the open source Build Your Own Radar front-end code.

Our first Tech Radar was released internally in July and we look to release a new version each quarter. The contents of each version of our Tech Radar will be reviewed and decided on by myself, with assistance from members of our advisory board of Storm technical leads.

The July Storm ID Tech Radar is now available at https://radar.stormid.com/july-2019 with the next version due to be published in October.

We think it’s important to have conversations within the company about the technologies and techniques that we use. Presenting these in a Tech Radar allows technical and non-technical people at Storm ID to find out about new things as well as encouraging discussion that we hope leads to people making suggestions that contribute to the future technical direction of the company.

Having regularly updated content on the technology priorities for Storm helps us promote what’s important to us and where we’re headed to existing and potential clients.

We also hope that the Tech Radar will be a useful resource for recruitment. Our view is that it will give potential new employees a better insight into what we are working on in web and software development.