What Does Inclusive Design Mean?

Why is accessibilty seen as an after-thought, or at worst an expense to help a handful of disadvantaged people?

Have you ever tried using a website or app on your smartphone whilst riding a bus when the sun is streaming through the window? You probably have. How did that work out for you?

I consider myself “able-bodied”, educated, I can read and write and English is my first language. This should be a breeze. Yet here I am in a situation where design decisions are having an effect on how I consume a website or app’s content.

The idea of ‘inclusive design’ (although this phrase hadn’t been coined at this point) was first introduced to me by Keegan Jones and Tim Van Damme when they spoke at Build Conference 2010. The iPhone had only been in our hands for 3 years and we’re still trying to understand how people were using it. We knew small, quick tasks were the most common actions; adding a quick to-do, playing a short game, composing a 140 character tweet.

The main thing I took away from the talk was that the internet was no longer being consumed solely on a desktop, viewing through a large monitor perched on a desk whilst in a comfortable chair. The iPhone broke a barrier. The web would start – and continues – to push its way into every moment of our day, regardless of what environment (surroundings or situation) you happen to be in. 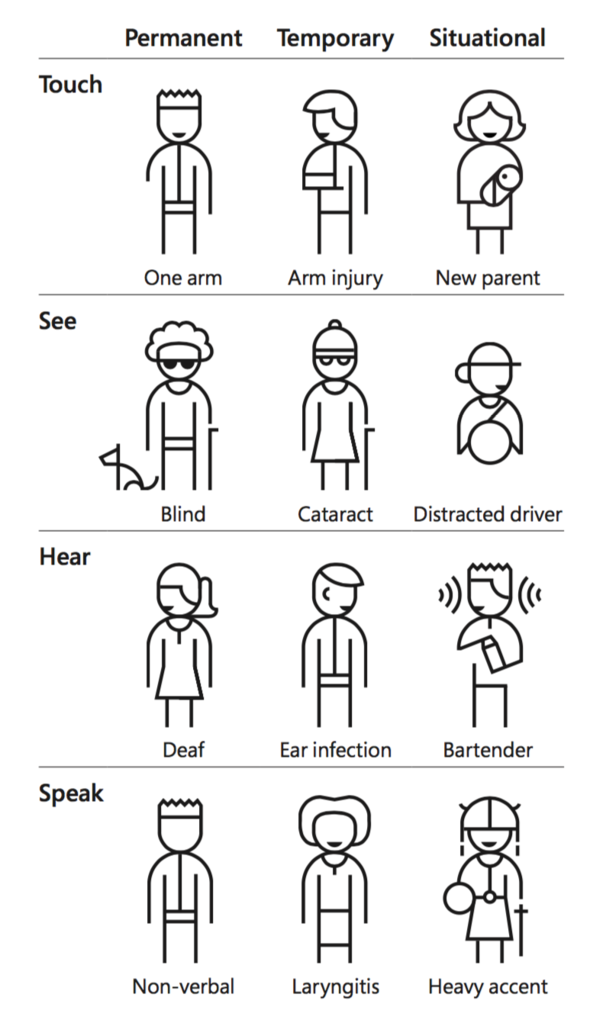 From then to now

Seven years have passed. Apple are celebrating the 10th anniversary of the iPhone with the release of the iPhone X. And yet while accessibility requirements have been around for a significantly long period of time, the reason for championing them has never been a global user focus.

The Microsoft Design team have released a large amount of material entitled “Inclusive Design”. Part of my excitement about this is that Microsoft have been able to define the different types of impairments and highlighted how designing for diversity will only make for a better experience. They would define what I experienced on the bus as a “situational impairment”. Very much a “yes, yes that” moment.

“Empower every person on the planet to achieve more.”
Microsoft – Inclusive Design

My argument, as a front-end developer, is that with the new focus on “inclusive design”, the more that we cater for people with permanent impairments, the better the user experience for all users will be.

Let’s step away from our screens for a moment

I attended the Accessibility Scotland conference in September which StormID have supported since launch in 2016. A few speakers referenced the Microsoft Inclusive Design work. We were encouraged to consider what this means to us individually, as at some point, many of us will suffer a permanent impairment, almost all of us temporary one and 100% a situational impairment.

It’s lunch time at the Accessibility Scotland Conference and I take a stroll up the road to grab a soda. I find a shop and low and behold a 10cm step. With the challenges that wheelchairs users have fresh in my mind, I looked down, shook my head and walked on in. 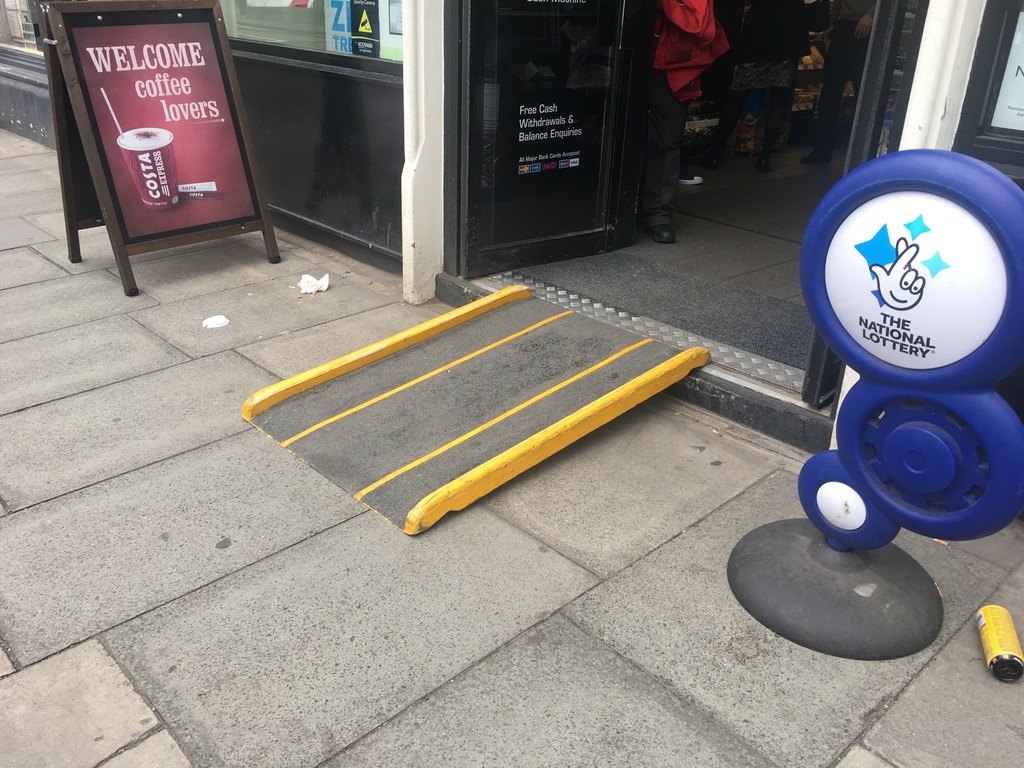 On my way out a ramp appears! “Well that solves that”. I am then greeted by a delivery man with a trolley full of supplies for the shop. The ramp belonged to him. He finished his delivery, threw the ramp in the back of his truck and drove away. Leaving me with the 10cm step. So not only would consideration help those we would often think to require the support (those in wheelchairs, those with limited visibility or even those with prams) but it would help the main function of the shop – getting supplies in both quicker and easier – but also be less intrusive to all users.

So, what’s the digital equivalent of the 10cm step?

There’s a few. For example, the contrast between text and background. Dark colours on a light background work well for users with visual impairments but also work well for “able-bodied” users reading a phone with bright sunlight glaring off the screen.

What about the move towards ‘smart homes’ and the invisible interfaces such as Alexa and Siri? How accessible are they? Users that are mute (permanent impairment) or users with laryngitis (temporary impairment) will struggle to communicate with them. But also those, like myself, with a strong accent (situational impairment) that will struggle with these new technologies.

How do we take this forward?

Empathy. From everyone. Designers, developers, clients, users. Everyone. Not to be confused with “sympathy”. Empathy is the ability to understand and share the feelings of others. Especially users with disabilities. The absolute goal is to understand the issues faced by the permanently impaired and find the best possible solution available.

You are more than likely to experience a temporary impairment at some point. Chances are, you’ll break a bone in your lifetime or contract laryngitis. You’ll definitely experience a situational impairment, whether it’s holding a Costa coffee cup or having a conversation in a loud bar.

Have you tested your product on a phone? Have you tested it in the environments it is most likely to be used? We need to conduct testing in more realistic environments. Lothian Buses could test their timetable app by simulating a user running for the bus. Is it easy to use? Easy to read? Easy to find in the phone menu given that they are in a rush?

If we start with empathy, we finish with inclusivity.

You can learn a lot with your own experiences but we still need to have empathy with those with permanent impairments. By getting it right for those with impairments, you’re likely going to get it right for everyone. Solve for one, extend to many.