Picture the scene. The year is 2011, multi-touch enabled smartphones have been available for the best part of 3 years and the world is eagerly awaiting the next revolutionary piece of technology that would transform our day-to-day lives once again.

Cue Siri – Apple’s “Artificial Intelligence Personal Assistant” built directly into the iPhone’s operating system. For the first time in history, millions of consumers were now exposed to a technology that they had only seen in sci-fi epics on the big screen.

Usage and popularity of Siri quickly exploded, as people asked it to do things such tell them where the nearest pizza shop was, or to send their fiancé a message to let them know they’ll be home late. Some people even went so far as to ask Siri to marry them!

The AI revolution had arrived – and it was met with huge success.

Ok Google, what happens next?

Fast-forward 6 years and personal assistants are everywhere. Siri is still going strong and competing products from Google, Microsoft, Samsung and Amazon amongst others have joined the personal assistant space. As well as these offerings, businesses are now starting to latch onto the idea of tailored interactive user experiences in the form of chat bots.

Chat bots have come a long way since their inception, and they are now able to perform a multitude of things such as allowing you to order shopping on the go via SMS or book a flight from Edinburgh to New York through Facebook Messenger for example.

With the introduction of programming frameworks and APIs such as the Facebook Messenger API, iMessage Apps and other developments like the Microsoft Bot Framework we can only expect to see more useful applications being developed in the future.

According to recent figures, there are 60 billion messages sent every single day via Facebook Messenger and WhatsApp alone. With this in mind, I predict that our expectations as consumers will begin to see a radical shift as more businesses begin to see the benefits of leveraging this form of communication.

No longer will we be content with traipsing the aisles of our favourite clothing store or browsing their online ecommerce site looking for next weekend’s outfit. Instead, we will text a personal assistant and get them to do it for us.

Here at Storm, we pride ourselves in staying on the ball when it comes to the latest and greatest technologies – and the mainstream introduction of Artificial Intelligence and Bots have been no exception.

Lately we’ve been playing about with technologies such as Microsoft’s Language Understanding Intelligent Service (www.luis.ai) and the Bot Framework (https://dev.botframework.com) to create a few exciting experimental chat bots. Examples include a bot that is able to tell you when your waste is due to be collected via SMS and a bot that can respond to questions about Storm’s policies, procedures and FAQs via Slack (our internal communication tool of choice).

As well as chat bot technology, we have also had the opportunity to experiment with Amazon’s latest innovation, the Amazon Echo. With this, we were able to create a “Skill” that allows our clients to ask various questions about Storm while they relax in our client / coffee breakout area.

Questions like “When was Storm founded?” or “How does the coffee machine work?” are met with a prompt response from Alexa, providing handy contextual information without the need to ask a member of staff.

The Limitations of Artificial Intelligence

Sorry, I didn’t understand the question I was asked

So far, in our adventures with AI and bots, we have found that whilst voice assistants like Alexa have a certain futuristic quality about them, they’re not always as accurate in deciphering what was asked of them – which in turn reduces the success rate of responses given.

We’d like to think the technology is at fault and needs a little more time to mature, but we can’t help wonder sometimes if some of our staff’s “stronger” Scottish accents play a part in Alexa wondering what on earth we were attempting to ask her. 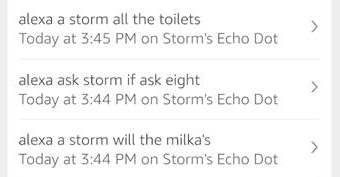 In contrast, while chat bots aren’t quite as “cool”, we have found that they do seem to be a lot more accurate.

People generally seem to interact with them in much simpler phrases and as the bot does not have to contend with things such as accents or background noise this results in a much better chance of the bot successfully interpreting the user’s request and feeding back an appropriate response.

As AI and machine learning technologies continually improve over the next few years, the question we have to ask ourselves is where do we go from here?

I predict that it won’t be long before we all have our own personal intelligent assistants that we carry around with us and interact with on a daily basis – either integrated into our mobile devices (a la Siri) or something much more discreet such as an earpiece as depicted in the 2013 film, HER.

Whatever the case may be, you can be certain that this is a technology that Storm will be keeping a close eye on over the next 12 months. After all, we need to stay one-step ahead of the game before SkyNet becomes self-aware… 🙂

Want to work in an innovative environment?
At Storm, we’re always on the look-out for talented people. Check out our current vacancies or send us your CV!