klıkbet/
noun
something (such as a headline) designed to make readers want to click on a hyperlink especially when the link leads to content of dubious value or interest.

At its core, clickbait is a marketing strategy used to create a headline that entices and intrigues.

Whether you love it or hate it, we’re all susceptible to the wiles of a clickbait headline. Why? Two reasons really:

“As a number of new studies confirm, you can blame your clickbait habit on two things: the outsized role emotion plays in your intuitive judgements and daily choices, and your lazy brain.”
Martin Gardiner, Wired

The first, emotional arousal, is a huge driver in forcing us to find out more. Headlines that stir up strong emotion – especially negative emotions – are more likely to see a higher click-through rate.

The curiosity gap is the other reason why we fall for clickbait. Upworthy is often lauded the original clickbaiter. Other notable conributors to the practice of including a curiosity gap in headlines are BuzzFeed and Indy100.

A behavioural science theory at heart, the curiosity gap leverages a reader’s interest via a headline (often alongside a compelling image which doesn’t “fill the gap” so much as fuel the curiosity fire) to encourage them to click through and read on.

So, how is clickbait made?

We already know that we must evoke some strong emotion, while also creating an information gap that piques a reader’s curiosity. With headlines, there are several elements that feed the clickbait element: word choice, puncutation and sentence structure.

Writing in the second person is a staple in many clickbait headlines. Addressing the reader in this way creates a more personal relationship with them and holds their attention longer as a result.

Questions are a fantastic way to boost the intrigue factor. By their nature, they imply an information gap on one side. Clickbait headlines phrased as questions can amplify the reader’s perceived information gap, which encourages them to read further to sate the need for this information.

Ellipses are a compelling form of punctuation which signal an information gap and heighten curiosity in a reader. Similarly, exclamation marks ramp up the intrigue in a reader by sensationalising the events covered in the information gap.

Similarly, capitalising words is great at capturing attention and emphasising or sensationalising the chosen emotion in a headline. 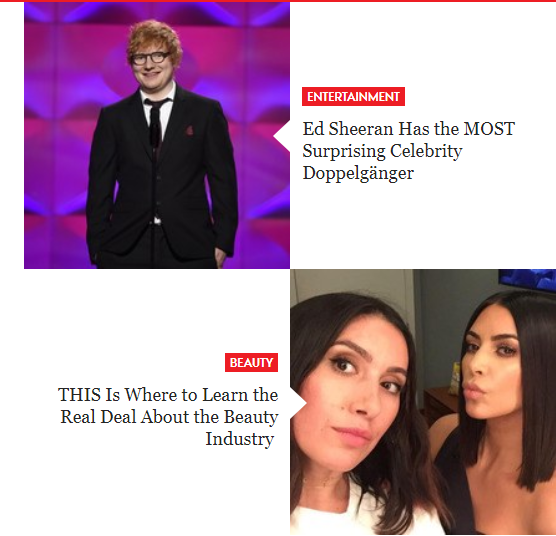 Phrases such as “You’ll never believe what happens next…” or “What happened next will shock you!” are prime clickbait headline candidates because they incorporate all of the above elements to drive interest and spark strong emotion in a reader.

Should marketers use clickbait?

If you ask most people, they’ll probably tell you they hate clickbait. That probably won’t stop them from reading it, but it’s viewed negatively by most who recognise it for what it is – a writing tool used to manipulate readers into clicking through to an article.

In August 2016, Facebook published an article in their Newsroom with a vow to “Further Reducing Clickbait in Feed“. In effect, they announced that “…websites and Pages who rely on clickbait-style headlines should expect their distribution to decrease.” Looking at my own newsfeed leads me to think that the algorithm may be struggling with distribution reduction more than they anticipated, because logging into Facebook this morning I was met with dozens of clickbait headlines and social media messages, urging me to read on. I resisted, but I may have saved a couple of links for later. (I need to know if These New Disney Princess Heels Are What Fashion Dreams Are Made Of).

It’s not just social media that clickbait can potentially harm. Clickbait can be detrimental to your SEO efforts if you’re not careful. Your H1 should include your focus keyword, which could be difficult if you’re trying to create an information gap in the headline. One way round this is to have a more explicit SEO Headline and meta description, and a clickbait title and OG description for social media. SEO tools like Yoast can provide you with this option. Teen Vogue are a great example of this. They advertise their articles with clickbaity headlines that differ from the H1 in the article itself.

Then, there’s your audience to consider. We’ve already mentioned that most people will probably admit to hating clickbait, even if they won’t admit to being susceptible to it. Brands, then, run a real risk of losing their audience’s interest if they routinely use clickbait. Overuse can come across as spammy, and you’ll be walking a dangerous line of losing readership and followers. Clickbait could devalue a brand’s image, which is a huge problem for marketers trying to boost brand awareness and loyalty among their content’s consumers.

When executed well, clickbait can provide businesses with a readership boost and increase interaction with their content. Driving interest and intrigue through headlines is getting harder as brands fight to be heard and read. With this being the case, it’s not likely that clickbait will disappear any time soon. It’s imperative we recognise the risks associated with clickbait content before we publish and stay smart about how we use it to grow readership.